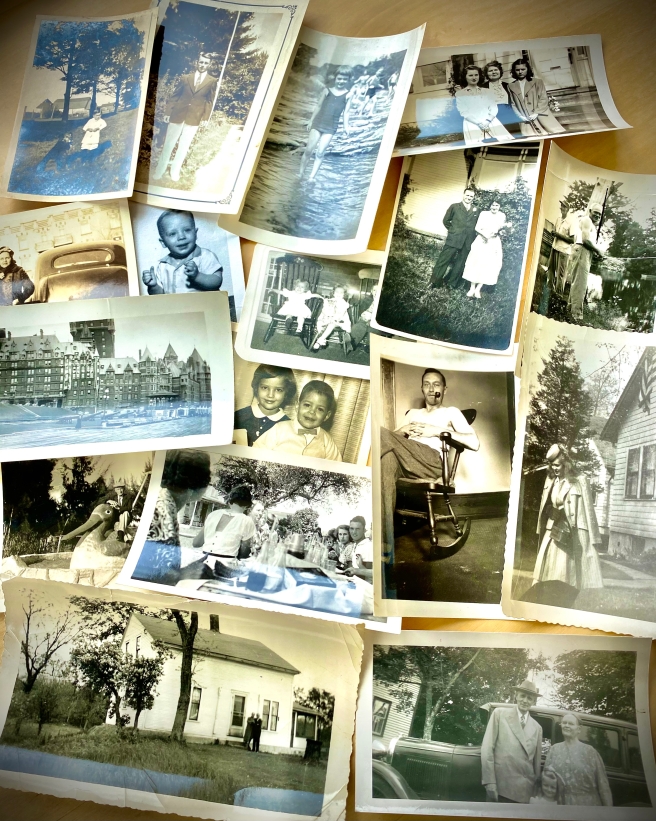 An assignment for my latest class sent me scurrying to the plastic bin in the basement where old photographs were piled in a disorganized mess. Most all had once been pasted into albums, providing some kind of context but the smell of those albums indicated that “slow fire” was at work. Slow Fire is the term for the deterioration of acidic paper which eventually destroys all. (Think of that dark orange paper in an old paperback in the attic.) In an attempt to save the photos I tore the albums apart but I stopped (like happens with so many projects) at demolition leaving all of those images in a tangled mess where there was no time frame or reference point left.

There’s a saying that you are still alive as long as there is someone who remembers your name. If that’s the case then there are people in these photos who are truly gone. Oddly a name will sometimes pop into my brain emerging from the murk like a long buried, almost viable, cork. Sometimes there is only a name accompanied by a vague idea of who he / she / they were but not why their photo came to be in that box . When we lose the last pieces of connective tissue are they just faces on paper? Surely we must have once known. Aren’t we supposed to remember these things?

There is so little family left to even wonder who these people were and there’s certainly no opportunity to ask the one or two remaining that still might know. As with many families here and elsewhere there has been so much movement and change there is barely any concept of family history left. There is a  good possibility that this no longer matters, that is if it ever did. My family was tiny; I am an only child who had an only child. It takes larger families who gather on holidays and retell stories year after year to keep family history viable. Genealogists have an easier time uncovering and following family trees when the stories are kept alive, although they are not always accurate.

There are legitimate questions about such matters. Is family history relevant in today’s world? Will it be lost only to resurface as a pressing issue in times to come? It seems it is the provenance of the old to ask such questions. Everyone else is too busy with the daily grind to even entertain such thoughts. Is modern life such a struggle it renders family history irrelevant? I can hear the chorus of historians and genealogists screaming “Nooooooo”. But the question stands. Do we need to remember who we were to know who we are?