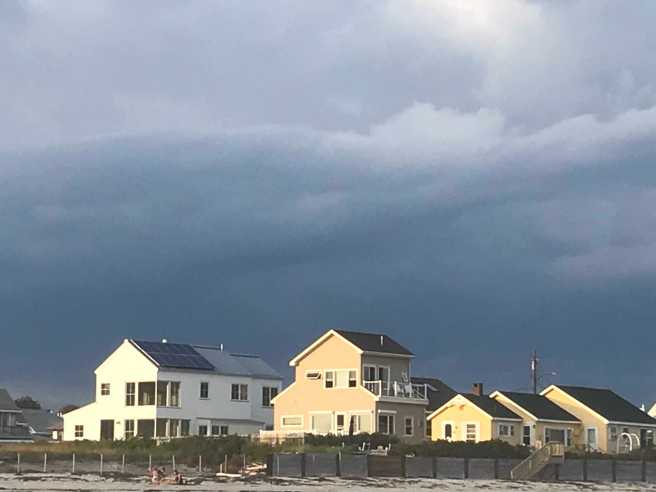 Is it because Fall is moving in, the colors everywhere changing to reds and browns and golds, leaving the vibrant greens for too many long months before they return? Fall is the favorite season of so many, but I find the transition–the colder nights, the dying plants, the disappearing birds–disheartening. There are oddities this year: the red and gray squirrels and the chipmunks disappeared a couple of months ago and they have not returned.

Monarch butterflies are on the move, headed south, gathering nectar for sustenance along the route from the last blooming rugosas, sedums, wild asters, and more. I’ve been watching them flutter by, mostly solitary but sometimes with one or two others, their purposeful migratory movements disguised by the way they seem to meander from plant to plant, so unlike hawk migrations. How do such ethereal creatures fly so far? How do they cope with cold nights and the increasing Fall winds?

Darkness arrives early and stays longer, its rapid increase from day to day quite apparent. Sunrise is more spectacular, if I can rise to it before daybreak when it is most vivid. Fall light is edged as the sun rises or sets, the angled light sharply defining rooftops, trees, grasses. Sometimes the light is strongly tinged pink or gold infusing everything it touches. The other evening traveling home as the sun was setting, the porch of a house, geraniums hanging in pots, rockers still in the coming evening, were bathed in strong rose colored light making the ordinary into a vivid, magical place if only for a few fleeting minutes, the whole scene glowing as if someone had pushed an alternate universe button.

I suppose it would help to keep the radio and the social media turned “off” in this time of wind-downs. The air waves are full of malaise, foul stories keep coming in a steady drumbeat, illustrating the lack of Humanity in the human nature of our beings. Fall brings hurricanes, damaging homes near or far, destruction and devastation. These magnificent, destructive, behemoths always felt powerful and dangerous but now, with Climate Change evidence abounding, our vulnerability feels enhanced. What will be destroyed next? What lovely palm-treed place of winter refuge, of tropic promise, will next be forever altered? Refugees, from storms or political upheaval, on the move everywhere. When might you or I be among their numbers?

It feels to me as if the Grifter mentality has spread like a plague, insatiable money hunger accompanied by power dreams, shoving us ordinary folk to the edges of forgotten and unimportant. The media pushes a constant supply of stories of cronies doing wrong and getting caught as the rest of us wonder how so many can gather more than their share of resources now becoming scarcer. So many of us do not care about the accumulations of wealth or power, preferring our lives to be filled with care and love of family, neighbors, friends, just getting by, content to notice what is beautiful in our lives–like sunsets and sunrises, and fleeting wings departing, while we steal off for one or two more moments of beach time., savoring every last moment before the oncoming cold.